Discovering the Lost Instruments of Ukraine 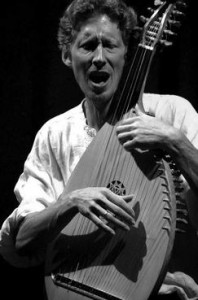 For the first time in 100 years, the original bandura, kobza, and torban will be heard! For those who could not hear him on his visit to Columbus in April 2017, this is a unique opportunity to learn from a master about our musical heritage.

Mention the words “bandura,” “kobza,” and “torban” to most Americans and you are likely to get a blank stare. These are musical instruments with a centuries-old tradition, almost lost under Soviet rule in Ukraine, but which are enjoying a revival thanks to the efforts of a transplanted American. Jurij Fedynskyj, a native of Raleigh, North Carolina, will explain everything in a lively and free concert, lecture, and demonstration, 7 pm, Monday, November 19, 2018.

Music has always been Jurij’s passion. At first, it was classical piano (he has a degree in music performance). But a few weeks in Pennsylvania at a summer camp to learn the bandura turned into a life-altering pursuit of not only the bandura, but also the kobza and the torban. He moved to Kyiv, Ukraine in 1998 to continue to study with modern masters, founded or played with various folk groups, and then decided to stay and devote himself to resurrecting the tradition of the kobzar (kobza player). Fedynskyj is touring the U.S. coast to coast this fall in just this fashion.

A kobzar was a bard, usually blind, who travelled with his kobza or bandura, singing psalms and dumy or epic poems. This was a well-established profession by the 16th century. The kobzar would map out a route of travel, visiting certain villages and cities, playing for the general public as well as leaders of the culture. The traditions of the kobzar, as well as the Ukrainian baroque lute or torban, were destroyed by the Sovietization of Ukraine around 1920-1930. Fedynskyj has dedicated himself to the task of reviving such a loss, which has meant researching historic instruments, learning the trade of instrument making, researching the repertoire played on these instruments, and mastering the instrumental and vocal techniques to reconstruct traditional performances. Some instruments had survived only as isolated museum specimens.

About 10 years ago, Jurij settled in the village of Kryachkivka in the Poltava region of Ukraine where he builds and repairs these instruments. He is interested not in the modern version of the bandura (the one that won his heart), but in the very light and compact traditional bandura, which has wooden pegs with about 20 diatonic gut strings. As part of his mission to restore traditional music, he founded the Poltava Kobzar Guild in Kryachkivka for makers and performers of these instruments. In addition, enthusiasts from around Ukraine come to the village to make and study with him at folklore camps year-round and to attend a large summer festival.

If you’re curious about the sound of a traditional bandura, click here to try your hand at playing!