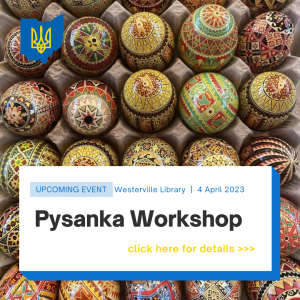 Learn how to make an intricately decorated egg known as Ukrainian “pysanky” – traditionally created to celebrate Easter or spring. Steeped in history and culture, discover the ancient technique of wax-resist – the process that gives the eggs their beautiful and distinctive look. Then decorate a real eggshell, finalizing the process with a candle at home. All supplies provided.

Then enjoy the April display of pysanky in the library’s mallway.

The workshop will be led by Marta Mudri, who has made pysanka her whole life. She has sold her work at the Ukrainian Museum Archives in Cleveland, where she was once a board member and where she remains an advisor.

Mudri was recently interviewed by PBS (April, 2022) about the meaning of the pysanka, both historically and in the current moment of war.

Mudri is a member of the Ukrainian Cultural Association of Ohio, Inc. (UCAO), the hub of Ukrainian-American life in Columbus and Central Ohio. Founded in 1983 in Columbus as a nonprofit association, the mission of UCAO is to promote Ukrainian culture, such as language, arts, sciences, literature, and history among its members and the general public, sponsor Ukrainian cultural and civic events in Central Ohio and provide financial and other support to people, organizations, and institutions for the purpose of promoting Ukrainian culture, as well as humanitarian aid to those in need in Ukraine.

Stay tuned for more locations and dates of our Spring 2023 Pysanka Workshop series.